Why the Growth of Mobile Website Development Killed Flash

If you are reading this blog, you’re most likely Internet savvy. And if you are Internet savvy, you've most likely used Adobe’s Flash Player. For sixteen years, this application has been the ‘go to’ software to run video, games, and other interactive online elements. However, near the end of 2011, Adobe officially announced that it would not pursue any more development on mobile platforms. This is rather significant, considering that the company has fervently defended its proprietary software's mobile potential for years. Presently, Adobe has bascially admitted (in a not-so-subtle way) that Flash has reached the end of its life expectancy.

Why has this media giant fallen?

A year before this announcement, former Apple CEO Steve Jobs stated that he would never allow Flash on any of his company’s mobile products. He claimed that the software wasn’t properly optimized for mobile devices and that it chewed up too much battery life. Many speculate that Jobs also had business oriented motives hidden behind his technical complaints. Allowing Flash on its devices would mean that Apple would lose some control over its own device's development platform. Less control means less money for any business. Regardless of motives, Apple has removed Flash from its itenerary. This was the first of several debilitating blows to Adobe, considering that today, Apple controls 65% of the mobile market with its iOS devices. With such a large chunk of the market off limits, Adobe would struggle to gain a foothold. Adobe was hit again when Microsoft stated that it’s Windows 8 operating system would support HTML5 rather than the Flash plugin.

Let's get down to the point.

If your website is Flash based, it might be time to move on. Make no mistake; Flash will be around for years. But the software is dying out and will become increasingly outmoded. The sooner you can transition to more current software, the better. HTML5 is the current front-runner, although there are other options. Adobe is adapting as well. Their new product, Edge, combines much of Flash’s user interface but allows for the inclusion of HTML5 and other common scripting languages. Plus, mobile devices support Edge (iOS too!), which means that it has a chance to survive.

If you choose to continute running a Flash-based website, you will run into difficulties when it comes to finding a web developent firm that knows how to build and edit Flash code. Those who do will charge more because it is an expensive and unwieldy process. Like an old car, eventually the maintance fees cost more than the vehicle itself. Futhermore, Google cannot index flash based sites efficiently. A website built on Flash will have an incredibly difficult time making it to the front page of Google's search results. Those of you who have poured a lot of money into their websites for Flash won't like to hear all of this, but it is the truth. The sooner you get out of this morass, the more money you will save in the long run. I urge you to visit other blogs. They all say the same thing. Flash is dying.

And while Flash is supported by other phone operating systems, such as Android, the sites still look bad. It takes unnecessary time and money for mobile website development firms to optimize websites for Flash. Even after, the sites are slow to load. When it comes to mobile users, speed is of the essence.

What to use instead.

HTML5 is the newest iteration of the ubiquitous markup language that seems poised to take the reins. This successor can do everything Flash can, but is supported by Apple and other companies’ mobile devices. And, its format is well recognized and easy to manage. HTML5 is still in its developmental stages though, so don't expect a massive transition in the blink of an eye.

This isn't a recommendation, it's a necessity. We tell our readers to adapt often. Adobe is making the right decision by jumping on the mobile development bandwagon with Edge. It would be wise to do the same with your own website while there is still time, lest you be left behind. 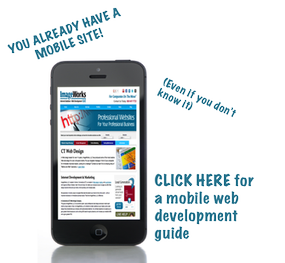