Someone asked me the other day where I get my news from, and “Twitter” was my automatic response. While I still get the content from news-worthy sites like CNN or AP, it’s not like I’m combing their homepage anymore but rather clicking a quick link to exactly what I’m looking for. And I don’t have to search far for the public’s comments. Simply by exiting the article, I can see how my friends and even people I don’t know are responding to the story through Twitter as well. Since Twitter is acting as a “second screen” for me and many other consumers, brands should be aiming to become part of this social commentary and push out their messages to the millions of users using real-time marketing. And that’s exactly what Oreo is doing.

In the past year alone, Oreo has managed to go from traditional advertisements on TV and magazines to drafting a quick tweet and graphic content about a current event and pushing it out to the masses on social media.

Their most current viral marketing tactic, and the inspiration for this article, was published yesterday, minutes after the British Monarchy announced the birth of the royal baby. 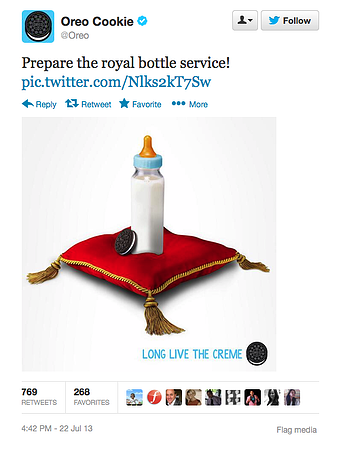 This marketing tweet was just the latest of Oreo’s explosive use of real-time marketing which has increased user shares by 280% and retweets by 510%, as well as winning several Cannes Lions, CLIO and Effie Marketing Awards.

Oreo’s Twitter strategy started with their tweet during the blackout at the 2013 Super Bowl between the San Francisco 49ers and the Baltimore Ravens. With most of America tuning into the sporting spectacle, everyone came to a halt when the lights unexpectedly went out. Not Oreo. Here’s what they managed to create and tweet out only 10 minutes after the blackout.

The tweet generated more than 12,000 retweets in the next 20 minutes and eventually worked its way up to about 16,000 by the end of the game. It was one of the best advertisements seen during the Super Bowl, and they didn’t pay billions of dollars for it – it was completely free.

And Oreo didn’t stop there. A few weeks later, Oreo took advantage of real-time marketing once more. People will say that Kit-Kat technically started it, which they did, but Oreo was a brand who was confident, creative and smart enough to respond. It all started with this tweet:

And then Kit Kat’s clever response and challenge to Oreo: 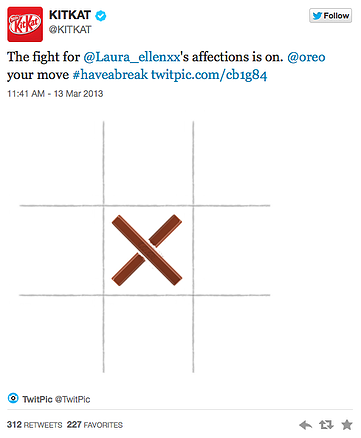 Oreo quickly responded in their own witty way: 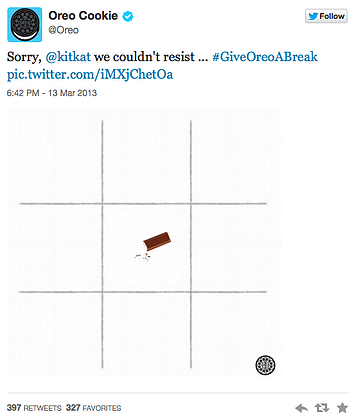 I argue in favor of Oreo here because it took Kit Kat two days after the original consumer tweet to come up with a clever response. It took Oreo seven hours, which in marketing time is like seven seconds.

Oreo has previously pulled off  Facebook marketing campaigns, and done so tremendously. Their “Daily Twist” campaign transformed the day’s current or past pop culture events into shareable content and for 100 days, Oreo took a relevant piece of history and commemorated it using the image of an Oreo.

The campaign ran mainly on Oreo’s Facebook page and increased engagement by 110% and increased their consumer reach by 5 million people.

What Does This All Mean For Me?

Don’t Be Afraid to Culture-Jack.

“Culture-jacking” is the idea of taking a brand’s marketing message and inserting it into a current news story or event in order to attract attention from consumers and the media. This is essentially, what Oreo’s entire campaign is centered around. Their real-time marketing tweets and Daily Twist photos were timely and topical, so naturally people found them relevant and did not hesitate to discuss them.

Your company should utilize the same strategy. One of the simplest ways to do this is to use current events to promote your brand, product and persona. For instance, if you are a mattress retailer, January 3rd is National Sleep Day, so use that date to have a special sale and push out content regarding your most comfortable mattress that is sure give your consumer a great night’s rest.

When this strategy works and attracts more fans to your page, it is a perfect opportunity to gain some leads. Getting consumers naturally interested in your business makes them more interested in starting a professional relationship, making them more likely to purchase from you in the future.

Oreo’s campaigns would have failed or faded from relevance if they had not consistently pushed out new content. They religiously posted a new Daily Twist photo everyday, making their website part of the consumer’s daily routine.

Make sure your company is posting new content at the very least a couple of times every day with the goal of increasing your consumer reach. Forgetting to post new content or failing to rise to the inbound marketing challenge can lead to a permanent disregard for the social media site and that is like completely forgetting about a couple hundred customers. And while it’s a good idea to be consistent, switch up your social media platform use a little. Post one thing on Twitter and another on Facebook, because they have different audiences with varying demographics.

Oreo’s biggest success in its use of real-time marketing is it cut through the red tape when it maybe shouldn’t have. Many companies require review of marketing materials, but Oreo went out on a limb and produced and published content on the spot.

One way many companies are taking risks is with the current trend of “memes” which are pictures with funny captions in bold print. Create or share ones that are relevant to your company, as long as they are all in good fun and won’t create a PR nightmare. You’ll know if something crosses the line because as an inbound marketer, you’re familiar with your audience’s buyer persona and therefore know what they will find entertaining.

Your content marketing strategy should mimic this idea. Do something that has never been done before, even though it might fail and don’t over think the situation. If it succeeds, you’ll reap the benefits and be perceived as an innovative leader by consumers and media alike. Content marketing requires a lot of trial and error, so even if your new idea seems completely crazy, you never know what may come of it.

Need to spice up your online marketing strategy? ImageWorks can help! Click below to download our FREE Internet Marketing eBook. 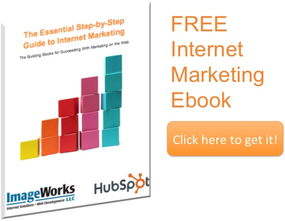